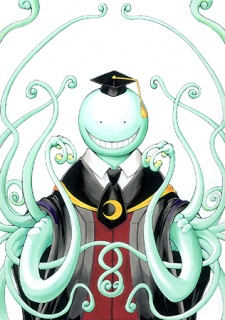 In the blink of an eye, the night sky is forever changed when, with a great explosion, the moon is blasted into a permanent crescent. Confronting the governments of the world, a yellow tentacled monster boasts that it was the one responsible for the catastrophe, and in a year’s time, it will do the same to Earth. Zooming around at Mach 20, the creature makes a peculiar demand: a teaching position at the prestigious Kunugigaoka Junior High School. Desperate to keep the creature in one place, the government agrees, and so the students of Class 3-E find themselves faced with an impossible task—assassinate the creature responsible for destroying the moon.

Although the fate of the world now rests on their shoulders, the class has more personal issues to deal with. Trapped at the bottom of Kunugigaoka’s hierarchical education system, they face harsh discrimination from both teachers and students alike. Defeatism abound, they don’t believe themselves capable of success in daily life, let alone against a monster that surpasses the abilities of any human. But as the enigmatic creature—whom they dub Koro-sensei—educates them in both assassination and academia, the children slowly find the courage to rise up and take aim at their target: the greatest teacher the world has ever seen.