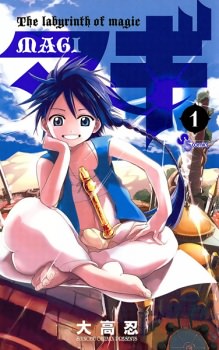 Magi : The Labyrinth of Magic , Magi – Sinbad no Bouken

Fourteen years ago, mysterious buildings called “Dungeons” started to rise in various places around the world. Within these dungeons, powerful beings called djinns rule over. When a person successfully conquers the dungeon, the djinn offers their immense strength in the form of Metal Vessels, recognizing him or her as a worthy king candidate. Adventurers from many empires and kingdoms venture into the dungeons in search of their bountiful treasures and the power of djinns. However, to travel through them is not an easy task, and only Magi—legendary magicians who choose kings and develop countries—can guide people through.

After being trapped in a room for most of his life, a young Magi named Aladdin finally sets out on a journey to explore the world along with his friend, a djinn named Ugo, who he can summon from his flute. Through a series of fateful encounters, Aladdin meets new various friends and allies, and together they begin an adventure that will change the fate of the world.