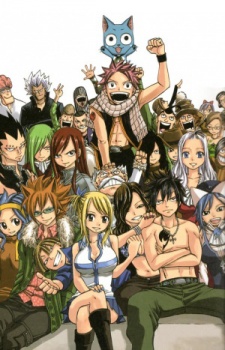 In the mystical realm of Earth Land, magic exists at the core of everyday life for its inhabitants, from transportation to utilities and everything in between. However, even with all its benefits, magic can also be used for great evil; therefore, to prevent dark forces from upsetting the natural order of things, there exists a system of magical guilds in the Kingdom of Fiore. Under the command of their respective guild masters, these guilds are made up of witches and wizards who take on various job requests to earn fame and fortune. One particular guild stands high above the rest in both strength and spirit, and its name is Fairy Tail.

In his quest to find his dragon foster father—Igneel—Natsu Dragneel, a fiery and reckless mage, and his partner Happy run into a young celestial mage by the name of Lucy Heartfilia, who reveals that it’s her dream to become a full-fledged wizard and join the Fairy Tail guild. After rescuing her from an abduction attempt, Natsu offers her a home in Fairy Tail. Now a member of the guild, Lucy teams up with Natsu and befriends fellow wizards Gray Fullbuster and Erza “Titania” Scarlet. Together, this motley crew set out on their many adventures, gaining many faithful allies and deadly foes along the way.